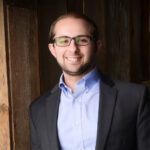 Justin Haskins is editor-in-chief of 1818 Magazine. Haskins is a widely published writer and political commentator, the director and founder of The Henry Dearborn Institute for Human Rights, and the editorial director and research fellow at The Heartland Institute, a national free-market think tank. Haskins was first contributor to Glenn Beck's "Arguing with Socialists," a New York Times best-selling book, and the author of "Socialism Is Evil," an Amazon bestseller. He writes columns for FoxNews.com, Newsweek, and The Hill, has appeared on television more than 100 times, including numerous appearances on "Tucker Carlson Tonight." His work has been featured by the New York Times, Washington Post, Wall Street Journal, National Review, New York Post, and the White House, among many other sources. Haskins was named one of the "Top 30 Republicans Under 30" by Newsmax, is a member of the Philadelphia Society, and holds two master's degrees from Regent University. Follow him on Twitter @JustinTHaskins.

In June 2020, elites from around the world gathered to announce the launch of a plan to “reset” the entire global economy, a proposal they ominously named the “Great Reset.” Among the many world leaders and powerful institutions that pledged their support for the Great Reset at the June meeting

In June 2020, elites from around the world gathered to announce the launch of a plan to “reset” the entire global economy, a proposal they ominously named the “Great Reset.” Among the

The list included below in this article shows the election victories and losses for socialist and far-left progressive candidates running for office during the 2020 general election. The list was created by

As many of you know who have been following closely my work on the “Great Reset” movement, this stunning proposal to usher in a completely new global economic system has not received

The Evidence Is Clear: America Is Headed for a Voter-Fraud Nightmare in November

Editor’s Note: The following article was originally published in early October 2020. I’ve been meaning to republish it as a smug “I told you so” for quite some time.  In less than

In previous articles, I went to great lengths to show why socialism is highly immoral, but it’s important to remember that the people who advocate for these policies are often well-intentioned individuals

Throughout many of the articles on this website, I have referred to mixed economic systems in which several large industries are socialized as “European-style socialism,” which is also commonly called “democratic socialism.”

The following is the second part of Justin Haskins’ “Why Marx’s Socialism Is Evil” article. The first part of the article is available by clicking here. Gambling According to a 2013 study

Winston Churchill, one of the twentieth century’s most important and influential leaders, once said in a speech before the United Kingdom’s House of Commons, “The inherent vice of capitalism is the unequal

What’s the Difference Between Communism and Marx’s Socialism?

One of the most significant signs displaying how little the public in the West knows about socialism is in its lack of understanding of how Marx’s socialism and communism relate. Throughout this

“The most dangerous pronoun discourse has nothing to do with gender identity. It’s the undefined ‘we’ in public policy debates that’s the

A Republic of Spies

Late last Friday, the National Counterintelligence and Security Center warned the American public against the dangers of spyware manufactured by one Israeli